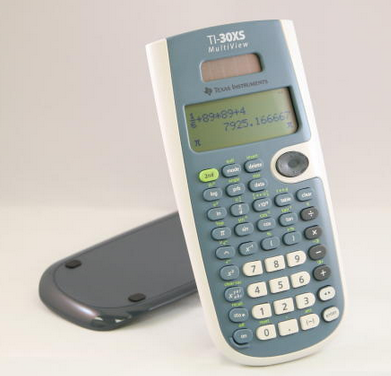 Even though I've been a big proponent of computer-based testing, I have to confess that the TI-30xs calculator scares the crap out of me.  There are so many buttons, and more than half of them are foreign to me, and even those buttons have secondary functions represented by  hieroglyphs in tasteful chartreuse (my wife's favorite color).  People ask me about the new calculator and I explain that it's just like old Casio GED calculator: you actually teach how to ignore all the buttons that you'll never use.  Sometimes I'll joke that the TI-30xs name is appropriate, because it's XS-ive.   These were the rationalizations I've clung to while avoiding this and other scientific calculators.  But then, just this past week, I saw the light. 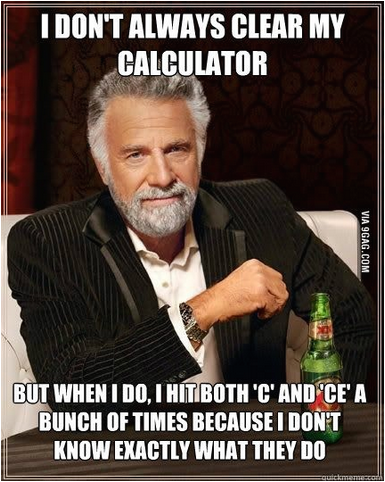 There was a similar freak-out about the introduction of the Casio FX-260 in 2002.  That piece of mandatory technology inspired a kind of mass-anxiety among adult educators similar to the one we've been dealing with as the test has gone computer-based.  During those 12 years, I was big on web-based distance learning, but I coped with the calculator by avoiding all but the most basic buttons.  The funny joke picture here about the 'C' and 'CE' buttons... that's totally me.  I even came across a TI-30xs at a yard sale, got it for 10 cents, and I've been weary and suspicious and hesitant to use it ever since.  Kind of like with the Coke bottle in The Gods Must Be Crazy, I'd probably be more likely to hit someone over the head with that calculator than to solve a complex math problem with it.   In the movie, they worshiped that Coke bottle briefly too, right? So maybe there are multiple ways to relate to a device that seems to come from another dimension.


My big breakthrough came last week when I watched the new GED Academy lesson on using the TI-30xs (also for use on the TASC exam). Yes, I work for the company, but I think I've seen all the other tutorial resources on this calculator and they didn't help me overcome my fears at all. Now the prospect of using the TI-30xs seems so much more reasonable after hearing the program's personal tutor introducing the calculator's most useful functions.
By the time the tutorial had converted fractions to percents and back and backspaced and moved the cursor all around an equation, I was getting excited to use these tools to actually seem better at math than I am.

The best analogy I can make would be to my smartphone. I was a flip-phone hold-out for years. The slogan, "there's an app for that" was flying around before I knew what an app was or which 'that' I should even be looking to address with an app.  Eventually, I got a Blackberry phone and used only a fraction of its limited capabilities (maybe akin to the Casio calculator in this analogy). And eventually I got an iPhone, and it was like the clouds had parted. I'm off to the races embracing the mini-computer's utility in ways I never realized I would come to depend on.  I'm sure I'm not alone in making that leap. It's possible that technology in adult ed is building up to a similar explosion of integration.

In education, we build systems around the tools that serve our purposes.  Those tools might have previously been paper-pencil practice tests, orientation videos, and affordable workbooks. We're a couple months into this grand 2014 high school equivalency experiment, and some of those tools that will shape our new systems are emerging: adaptive programs that personalize each learner's experience, websites that consolidate resources and feedback in one place, and maybe even complicated looking calculators that actually make complicated math problems more approachable. But these transitions aren't going to go smoothly unless we're ready to cozy up to some of the ideas, practices and tools that we've always seen fit to reject.