One statement that I sometimes hear about distance learning is that classroom instruction is always preferable to online learning.  Really?  Maybe if your experience is primarily with providing traditional teaching or if you've been trying to turn classroom learners into self-directed learners at a distance or if you're using software developed for the classroom by K12-focused companies.  Who is facilitating, who is learning, what the learning objects are... those are just a few of the variables that determine the possibilities of both online and classroom based education. Nevermind the fact that a hybrid of the two, blended learning, is generally considered to be the best case scenario for teaching adults.

The Mother of Invention
This year, I had to accept the fact that I wouldn't be attending the COABE conference in New Orleans.  The possibility that my third child would arrive that week meant that I was basically grounded.  My new reality was not simply missing the conference, but looking for ways to participate at a distance.  My need to soak up the spirit of innovation at the conference drove me to a few different avenues of social media.  Of course, the distance participation is really enhanced by the participation by in-person attendees, so that brings us back to the superlative-worthy blended model (if you were at COABE, in-person or otherwise, please add some of your highlights here with a comment).


First, I posted on the LINCS discussion board about my unrequited love for a responsive national community of practice for adult educators. Then I posted on this bog confessing that I wouldn't be attending and encouraging readers to attend the Essential Education session.  And then I posted and commented on the new COABE group page on LinkedIn.  Putting out those feelers built up my anticipation for the conference, and it seemed to build interest in the distance participation modes that are often obscure and sometimes afterthoughts.

So, I missed the conference while awaiting my third baby's arrival.  The possibility that I could be pulled away at any time made me focus more intently on making the best of it from afar. As @EssentialEd and @GEDAcademy on Twitter, I posted updates about our plans for the coming year. But as @jkguard, I pursued my personal interests and provocations.  It was a great soap-box for me and a bill-board for my company. I mean, knowing that people were listening (more so than on the #adulted hashtag the rest of the year) was really energizing for me.  Some discussions were had. Some retweeting (my stuff getting forwarded and vice-versa).  But I still felt like I was only a reaching a select few adult educators who use Twitter, most of them state-level and thus obligated to 'impartiality,' or promoting products or services (like me).  At times, the interaction within the #COABE13 stream felt like it could have been had on the exhibit room floor, among exhibitors.  Maybe that's an exaggeration, but one active participant lamented post-COABE that cliques do tend to form at conferences.  The same is true of social media - it takes on that preacher/choir dynamic - unless it's actively integrated into the experience. 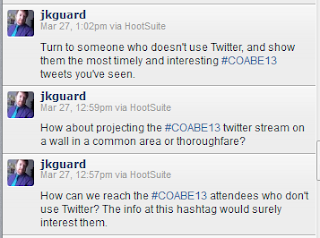 I wanted to make sure everybody in attendance was part of the real-time conversation and flow of information that takes place on Twitter.  Not just to consume what promoters wanted to share (though much of that was as informative as the sessions going on).  I understand that most conference content can't be shared online, or else why would anyone attend? New Orleans broke the record for COABE attendees with well over 1600 people, I hear.  But I'm willing to bet that fewer than 100 of those people were reading the #COABE hashtagged discussion.  But, it was a pretty spirited focus-group, nonetheless. Plenty of those not able to attend seemed to enjoy the twitter stream and helped to make it worthwhile.   Going back to the allegory of distance learning... when viewed by traditional classroom teachers, the services taking place online seem insular and only narrowly applicable and not relevant to the overarching mission of the organization.  But when the participants are involved in the establishment of an alternative it can really snowball quickly and turn into something viable that wouldn't have been conceived of without that outside perspective.  From the COABE conference, there were a lot of different efforts at extending the conversation. I'm going to find them and post them here as an update gradually. Care to contribute some to help me with that?

Be Fruitful and Multiply the Pathways

Somehow, I made it through the whole COABE conference without my third child arriving. There was a false alarm on Wednesday, but things really took a turn for the serious on Friday, right after dinner.  Karen's contractions picked up quickly and we were at the hospital by 11pm with one of their midwives and our doula on hand as well.  This would be our third child and our third over-night delivery.  After some time in a birthing pool, Karen's water broke and Matilda Clementine was born six minutes later at 1:15am.  It was an incredible surprise.  After two boys, we were sure that the third would turn out the same. I thought I saw a little something male in the ultrasound.  We'd just kind of accepted it.  Instead, Karen's wish for a new gal pal came true.

I didn't tweet the developments of the labor, don't worry.  Some of those details I will be taking with me to my grave.  However, there were a couple Facebook posts, though mostly to alert friends that an announcement was on its way.  People out there on Facebook were rooting for Karen. Tapping into that wider base of support feels really good when taking on a big challenge and helps those in your network feel like part of the struggle.  During the early labor, Karen and I ran through lists of boy names, since we hadn't settled on anything. I took some suggestions from Facebook friends. My Twitter followers didn't respond when asked (ugh).  Not every invitation to distance participation is fruitful, but the opportunity has become expected.  I'm certainly into it.

To all of my colleagues who came here for an update on my new baby, I hope this post delivered.

Takeaways: Now that You're Home...


What's the best way to mine these resources and share them with our colleagues?
Posted by Jason Guard at 2:51 AM